Tests of the OLDSMOBILE CUTLASS SUPREME TURNPIKE CRUISER when the car was newly released averaged  out to approximately 16.8 Hwy MPG.

Magazine tests rarely evaluated a regular 1967 Cutlass, but there are plenty of tests of the Oldsmobile Cutlass Supreme with the amazing Turnpike Cruiser package. The TC package gave decent gas mileage for the era, stable and very quiet high speed handling, plenty of room in a package that provided easier parking than a full size car. The TC had lots of torque for decent acceleration and hauling families with luggage over Interstate highways economically, quickly and comfortably.

The name Turnpike Cruiser was first used a decade earlier by the Mercury division over at Ford. Interstate philosophy inspired comfortable highway cruisers or full size economy cars. Various formats appeared over the years but it wasn't until 1967 with the Oldsmobile Turnpike Cruiser that  all the elements came together in one package…….

…… The 1967 Oldsmobile Turnpike Cruiser took all the factors that had been tried before, incorporated them into one new package and expanded upon the concepts further. The Olds TC came on the heels of the home run Oldsmobile achieved with the Toronado the previous year. Olds was known as a cutting edge division back in the 1950s. In 1966 Olds revived their image as innovators with the radical for the time full size front wheel drive Toronado. Cadillac let them work out the bugs, and then used the platform for the new Eldorado in 1967. In 1967 Olds beat a new path ahead of the crowd again with the Turnpike Cruiser. Below is one of the first advertisements for the TC which appeared in the page  of the Oldsmobile magazine ROCKET CIRCLE. 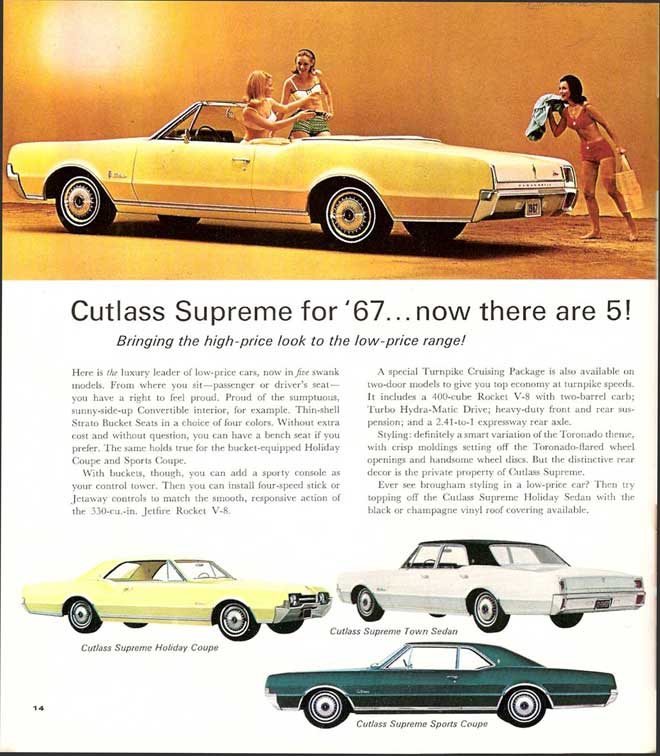 The Turnpike Cruiser Package was only available on the top 1967 Oldsmobile Cutlass model, the Supreme. Out of the five Supreme body styles, the 442 and Turnpike Cruiser could only be ordered on the two doors: Sports Coupe, Holiday Coupe and Convertible. The economy family hauler formula was slightly changed this time by building it into an intermediate instead of a full size car as was every other prior attempt by other manufacturers. The Olds TC didn't stop at economy. The frame and suspension was pure 442, making the TC a valid high speed highway cruiser.

The TC squeezed out decent MPG even with a 400 engine. The tiny two barrel carburetor was calibrated to work with a revised camshaft. Cam timing optimized torque at a lower RPM range to accommodate the highway cruising 2.41 rear axle. The AMA specs on the car list both 2.41 and 2.56 axles. The magazine test cars used 2.41, but the axle was switched up to a 2.56 ratio upon public release. The early 1966 advertisement above lists a 2.41, proving that Olds originally intended to release the lower axle to the public

Below are a few pages out of the AMA spec sheet issued by Oldsmobile. AMA sheets are available through the Oldsmobile History Center, Lansing Michigan and GM Canada Historical, Oshawa, Ontario. To see other pages of this booklet refer to the 67 Cutlass 330 story also in the GAS LOGS section. 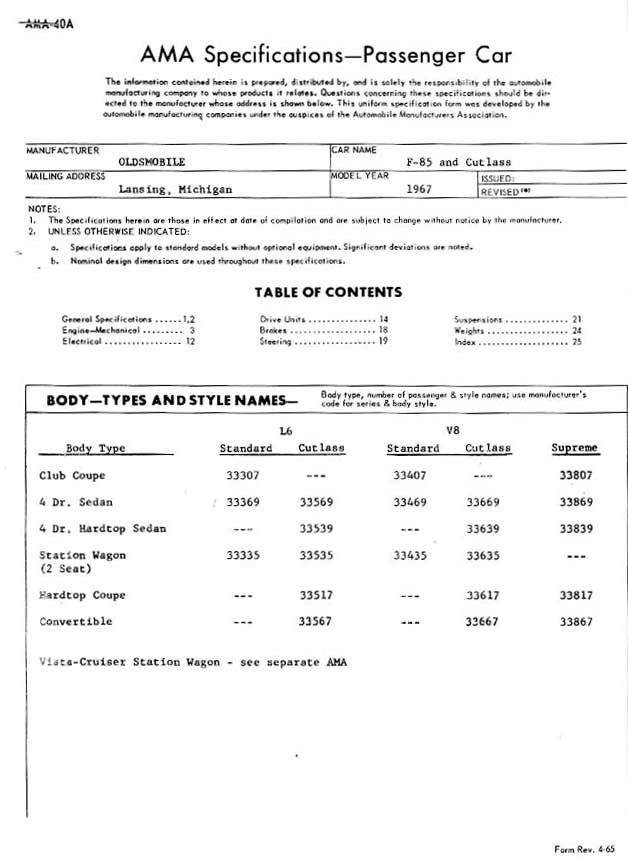 Oldsmobile barely mentioned the TC package in the spec sheet, providing minimal information about the 400 engine in the detailed charts to follow. 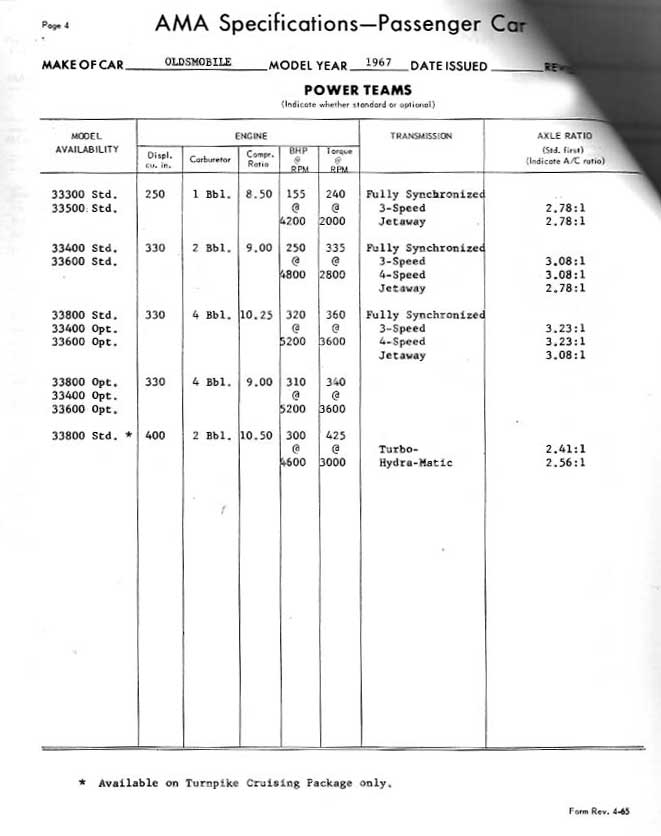 As seen above, the TC used the Turbo- Hydro Matic 3 speed auto which was otherwise only available for the 442 or as an option on the Custom Vista Cruiser. All other F85 and Cutlass packages had to make do with the two speed Jetaway. The Turnpike Cruiser used a unique Turbo-Hydro Matic with modifications specific to the Turnpike Cruiser application.

Below is a dealer bulletin dated Oct 11, 1966 updating the sales people about the Turnpike Cruiser package. The dealer brochures provided sparse information about the TC. 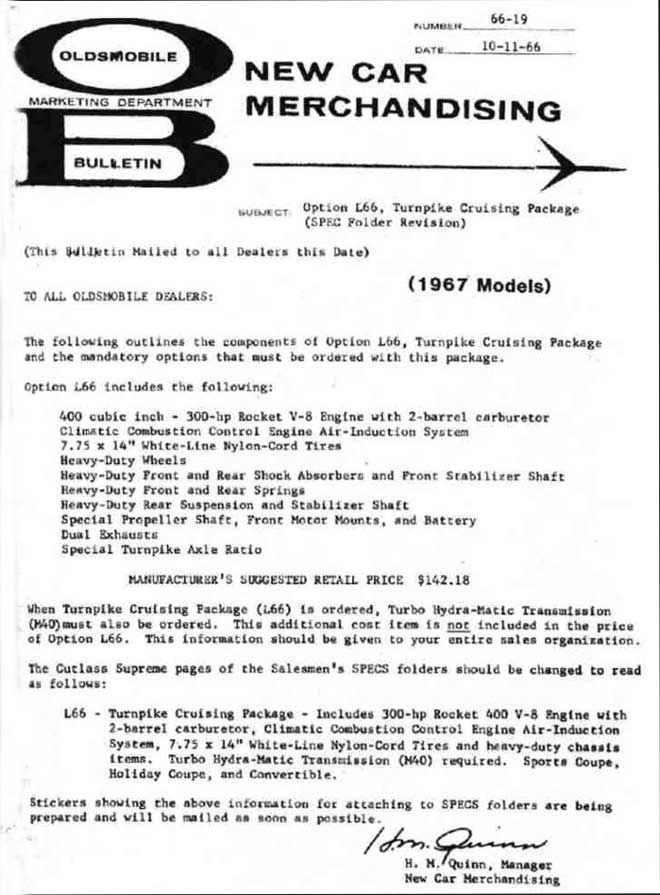 One important part of the TC package was a new Oldsmobile system named Climatic Combustion Control. This system provided heated air at startup ducted in from atop the exhaust manifold. As the engine warmed up, a plate in the air cleaner opened to mix in cooler air maintaining constant air temperature. Controlled air temperature allows carburetor settings to be optimized at 100 degrees F. The Turnpike Cruiser was thus able to run leaner carb settings than typical 1967 carburetors which had compromise settings designed to blanket a wide variety of outside air temperatures. This system was optional on other Oldsmobile engines and later became a standard item on most US cars in the 1970s. Below is a diagram of the system in the 1967 Oldsmobile dealership sales brochure. 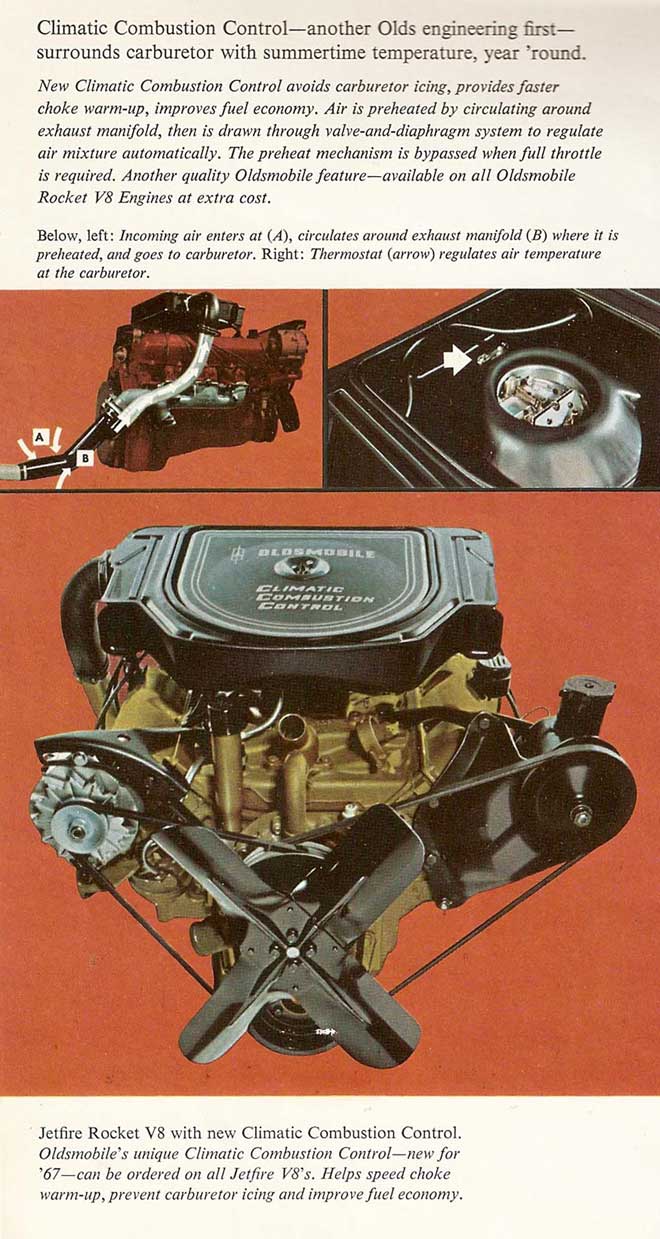 The Turnpike Cruiser handling was the equal of the 442: both have a convertible frame and heavy duty suspension which improves stability at high cruising speeds. The 442 was considered the best handling of the muscle cars of that era. Even the standard Cutlass with regular suspension was praised for balanced handling in an Owners Report published in May 1967 POPULAR MECHANICS. Anyone who has driven a 1967 Cutlass will notice the directional stability and nice cornering of the car. It is a terrific handling car when considered in the context of the era it came from.

The Turnpike Cruiser tested by magazines improved handling an extra step with radial tires which were offered primarily to boost the economy of the package. The added side effect of great dry handling was a bonus that testers considered not worth it in view of the scary wet handling. Rain and wet adhesion was too slippery. Radial tires have come a long way since then. The radial tires weren't included in the public version of the TC, but radials could be ordered as an option in addition to the TC package.

The magazine testers had cruise control on their TC packages to enhance MPG one step further, but couldn't realize the potential because even back then traffic was too congested to truly cruise on the highways near metropolitan areas. Sadly, the powerful and yet fairly economical Turnpike Cruiser wasn't a major success due to consumer indifference. The concept trickled into the 1968 2 barrel 442 option and the 1970 Cutlass SX which offered a 2 barrel 455.

Extrapolating from the lousy police fleet MPG, someone using a 1967 Oldsmobile Turnpike Cruiser primarily for stop and go won't realize the advantages of the TC. This may be the reason for the failure of this great car to catch on with the public. Joe Average primarily commutes to work and grocery stores, typically only vacationing for 2 weeks a year. Even the guy commuting 100 miles from the suburbs to work was likely trapped in gridlocks which were common even as early as the 1960s.

Aside from long distance salesmen few people mainly drive on uncluttered Turnpikes far enough to derive benefit from the TC. Given the low price of gasoline at the time, the cost of the TC package wouldn't entice many buyers. The package was cheap at $142.18 but the mandatory Turbo Hydromatic option coupled with the TC inflated the cost quite a bit. Rather than the economy angle, the TC held appeal to  someone wanting smooth quiet fast poised cruising capability.

Below are the old CAR LIFE articles. Following the articles, OOCC has created a summary of the Turnpike Cruiser MPG figures from various sources. 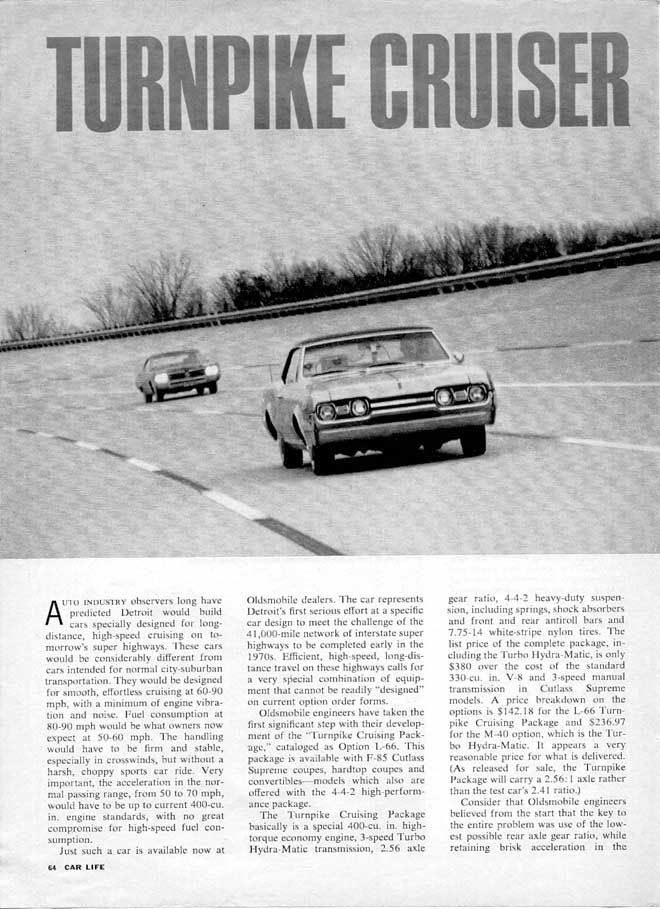 This article is from CAR LIFE April 1967. CL tested the TC extensively and enthused that it was the car of the future. Unfortunately it took a few decades before USA car makers began producing cars capable of running low RPMs at highway speeds. Occasionally a decent sized highway cruiser would pop up such as Chrysler's 1976 Feather Duster and Dart Lite, but economy was usually equated with small econo boxes. We never really saw the potential of the TC translated to reality. Eventually when CAFE standards began worrying automakers, low highway RPMs were accomplished using overdrive transmissions rather than low rear axles. 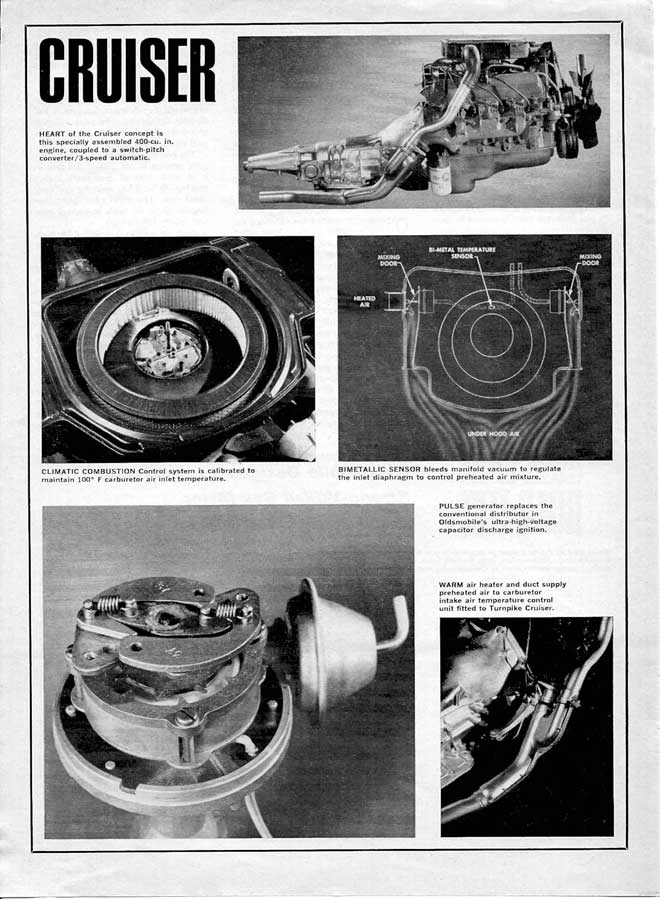 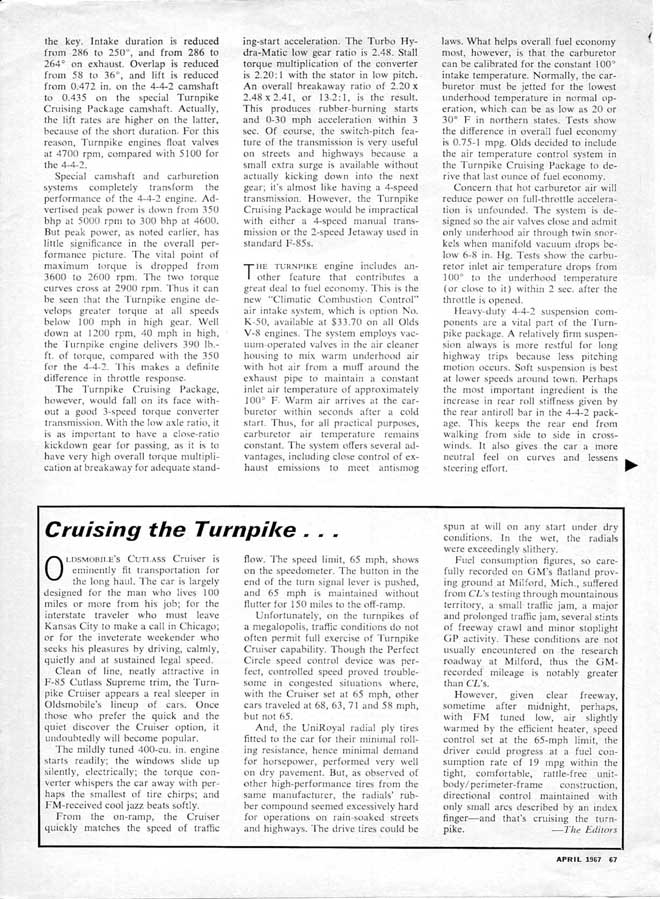 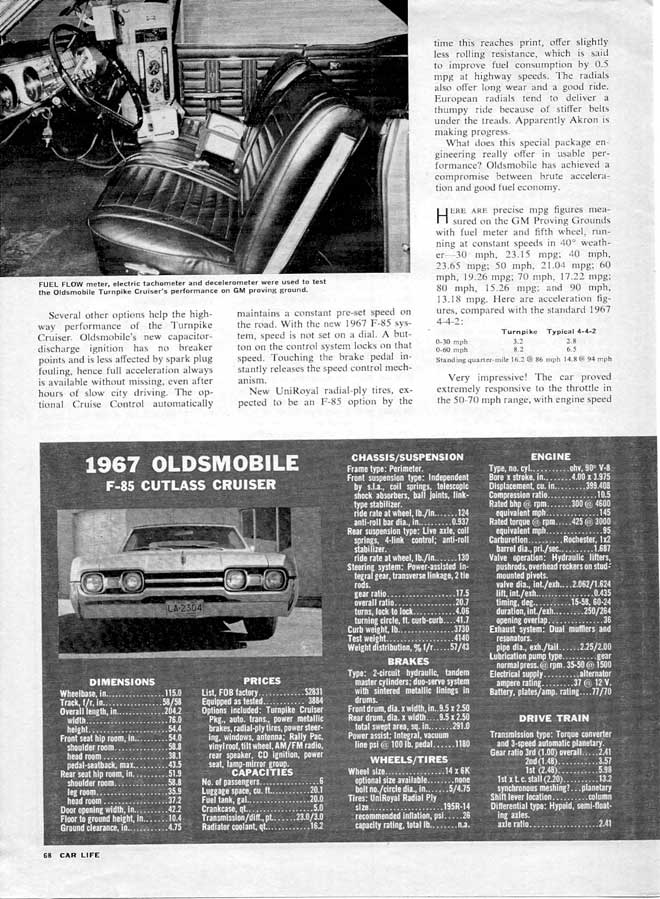 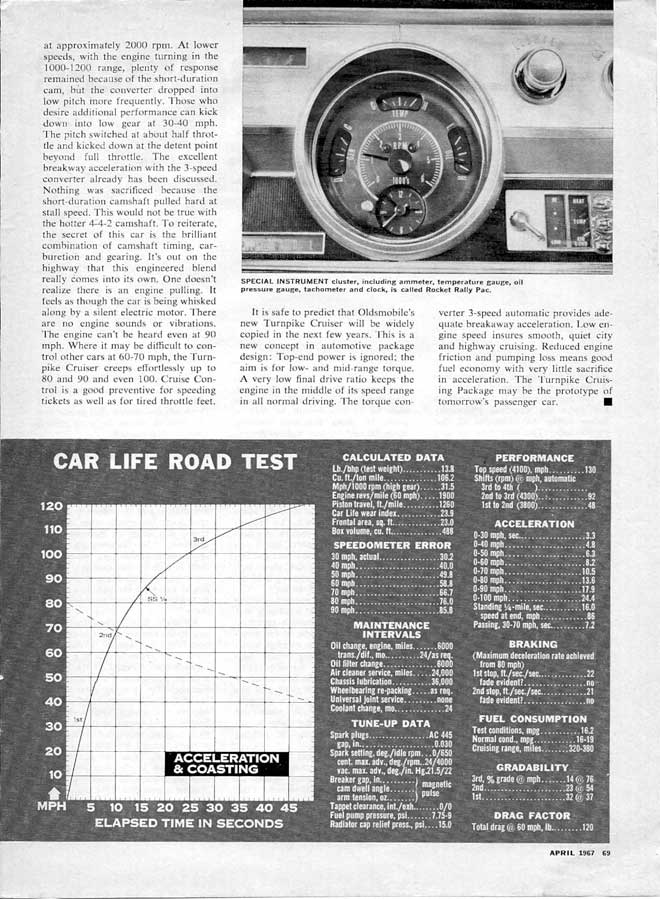 HOT ROD tested a Turnpike Cruiser in their April 1967 issue and came up with "18-21 MPG" while riding on 195R14 sized radials and running drum brakes for less drag.

The POPULAR MECHANICS Owners Report tabulated the results for Cutlass drivers with the 400 4 barrel and the Turbohydromatic 3 speed auto: 11.9 MPG City and 14.7 Highway. The 400 engine Cutlass is listed without reference to what proportion were 442s or Turnpike Cruisers, but mentioning a four barrel carb suggests they were all 442s. The 442 was more popular, so it's likely that the majority of the data came from 442s with the automatic transmission and the normal auto 3.08 axle. There may have been a few Turnpike Cruisers represented in this figure. To read about the 1967 442 check the story filed after this one in the GAS LOGS.

MPG REAL LIFE USER- 22 MPG Hwy.  John Gordon has owned a 1967 Cutlass Supreme Holiday Coupe Turnpike Cruiser for over 20 years.  He  was a GM Century Cruise Participant on August 16, 2008 cruising from the GM Global Headquarters at the Renaissance Center up Woodward Avenue to the heart of the Woodward Dream Cruise in Royal Oak and the surrounding suburbs. John wrote an article about his car for The GM Heritage Center website.  John bought the car in 1987 and has kept it in show car condition. It is never trailered to shows no matter how far.

"When I drive my car on the open road at 65 miles per hour, I can get about 22 miles to the gallon. Some of the newer cars on the road now do not get that kind of gas mileage. But, when I want to play or show off a bit, I can touch that accelerator and be gone in a flash. Unfortunately, I’m getting a bit too old now to behave in such a manner very often, but I’m not dead yet so every now and then... "

An OOCC contributor, Magnus King recorded 8.5 City and 18.2 Hwy with a Cutlass 330 2 barrel, Jetaway and 2.78 axle. To see more details look up 1967 Cutlass in the Gas Log section. To read road trip stories taken in that Cutlass go to Destinations section and read DESERT OLDS and ROUTE 66.